Traditional Indoor vs. The Agrify Solution

Moving cannabis production indoors improves yields, quality, consistency, and ultimately, market value. But is there a way to take these improvements one step further? The Agrify Solution is a combination of high-tech vertical farming units (VFUs) and Agrify Insights™, that outperforms all other other vertical cannabis grow systems.

Agrify improves outcomes over and above traditional indoor cultivation by hundreds of dollars per square foot. And it does so, not just once, but in perpetuity.

As many cultivators are well aware, cannabis is uniquely suited to growing indoors, and the most familiar indoor setup is the warehouse. Widely used by the commercial sector, warehouses are a single horizontal canopy design within a climate-controlled space. These days, warehouse-style facilities are massive and can run up to millions of square feet of canopy. 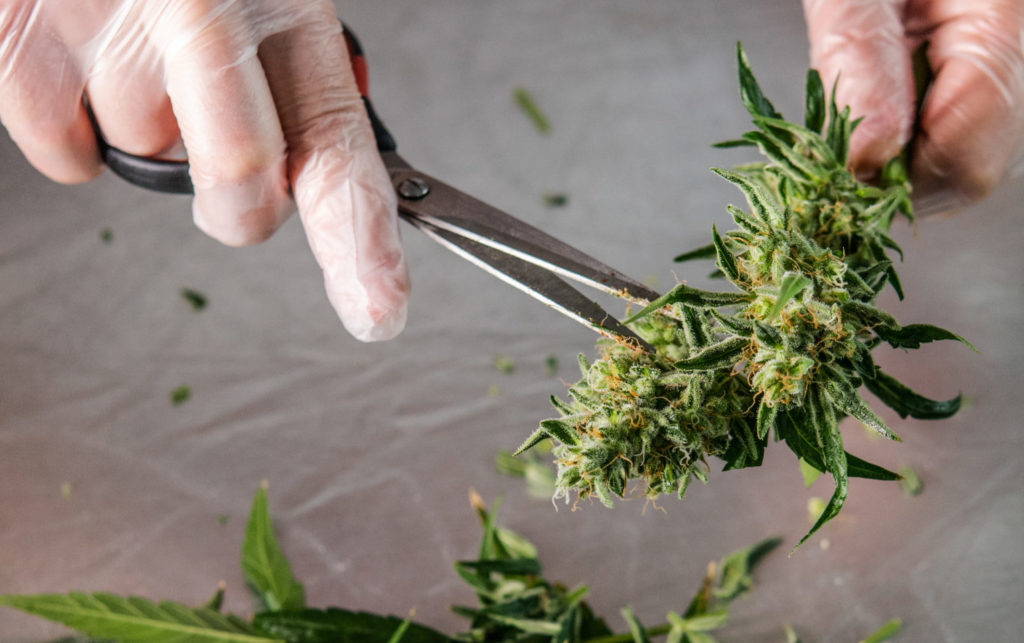 Yet, the single horizontal canopy design fails to use the vertical space. Between the canopy and the ceiling is a large, unprofitable dead zone. Considering cannabis plants, especially indoor plants, are typically grown short and bushy, all this over-canopy space is a substantial lost opportunity.

Agrify’s vertical farming solution ensures the most production potential out of what was once a useless vertical environment. The modular VFU design is stackable. Depending on the size of the facility, it’s possible to grow in VFUs piled up to three high, each floor accessible by walkways and stairs.

Let’s compare the numbers from two imagined facilities, each with 5,000 sq. ft. of cultivation space. One is set up with Agrify’s VFUs and the other with traditional horizontal rolling tables.

Using conservative numbers, we estimate that Agrify’s vertical cannabis grow systems increases the total canopy from 4,500 sq. ft. to 5,888 sq. ft. Plus, thanks to the data-driven insights pulled from each highly controlled micro-environment, the growing space is optimized by crop and cultivar. As a result, the total garden yields increase from an estimated 2,181 lbs to 3,696 lbs annually. That’s a 69 percent increase over traditional. 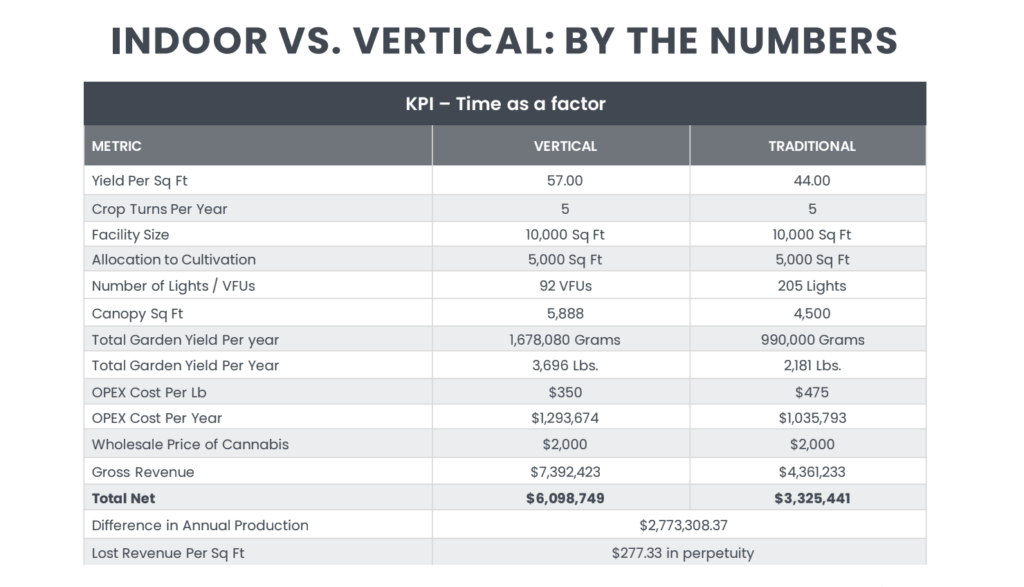 Instantly, this design doubles production by growing up, not out. However, Agrify has evidenced upwards of 6x the output over conventional warehouse designs.

The premise of controlled environmental agriculture (CEA) is to create a stable, predictable climate that optimizes growth. To start, moving production indoors mitigates all the ecological risks of outdoor growing. Why? Because plants are protected from inclement weather, climate change, and seasonal shifts.

However, even the indoor environment is prone to fluctuations. Commercial cultivators are intimately aware of how responsive cannabis plants are to changes in their environment. The temperature, humidity, lighting, vapor pressure deficit, and other environmental parameters can all impact the phytochemical outcomes, which translates to highly variable cannabinoid and terpenoid profiles.

Agrify’s VFUs create tightly controlled individual microclimates. As a result, the cultivator controls all outcomes within the unit. In addition, integrated sensors feed up to 1.5 million data points annually into Agrify Insights™. This tracks and analyzes the environment for unprecedented crop intelligence. This combination of a controlled environment with timely data means cultivators create intentional grow climates that are repeatable, time and time again.

Variation in the environment can lead to dramatic differences in phytochemical outcomes. For example, in a recent Grow Off competition between growers working with a single cultivar all cloned from the same mother, terpene content ranged from 0.86 percent to 5.32 percent, and cannabinoid content from 15.37 percent to 28.57 percent.

The Agrify solution is an alternative to traditional indoor facility design that makes the most use of facility space while optimizing the environment for high-quality output. Cultivators don’t have to choose between increasing production and compromising flower grade. Agrify allows companies to improve both consistently.

Ultimately, this translates to striking differences in facility profitability. Even using conservative calculations, Agrify can increase net profits by potentially as much as 83 percent over a comparable traditional layout.

Let us help with Agrify’s combined hardware and software solution. We apply data science and a continuous improvement process to every aspect of cannabis production. It means better yields, better consistency, and better profitability for indoor growing.

Ready to take your grow to the next level? Contact Agrify to learn more about the leading industry vertical farming solution.

Home Traditional Indoor vs. The Agrify Solution
Table of Contents
Add a header to begin generating the table of contents